In honour of the weekends Dragon Con convention, the JBC team has come up with a special edition 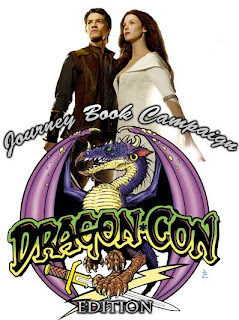 "Journey Book Campaign: Dragon*Con Edition
This last weekend, Seeker fans took DragonCon - one of the largest pop culture conventions in the world - by storm.
This week, in celebration of the LotS event fans held at Dragon*Con, the JBC has decided it's time to inform decision makers at ABC of the fandom's work and let them know just why this show deserves to be brought back!

In your letter you should focus on informing the recipients of the LotS activities at D*C, including but not limited to:


First ever LotS Fan Table at any convention
4000 iTunes free episodes
Coordinated LotS costume parade (tons of people in Seeker costumes:
Mord-Siths, Confessors, Darken Rahls, Jagang, Jennsen Rahl)
2 panels
LotS party
Tear away poster campaign
"Seeker Cast" podcast live recording
And for those who want to take that extra step, you can print out pictures from the convention and mail them in along with your letters. Photos are recommended, as we all know a picture says things words cannot. :)

Addresses for the week of September 6th-11th:

They are spot on the money saying Dragon is the largest pop culture convention - Eddie McClintock of Warehouse 13 tweeted last night saying it was insane there and that SDCC had nothing on Dragon Con.
So our presence and the lucky addition of a fan table is all the more important. So lets show DisneyABC what we can do!

See the original LJ post here
Posted by Hellsbells at 09:26