I must admit that Denna is perhaps my favourite of the Seeker villains. She's just so utterly ruthless and totally loyal at the same time.

We're first introduced to 'Mistress' Denna is Season 1 when she is called up on to capture and train Richard. She is our first glimpse of a Mord'Sith.. 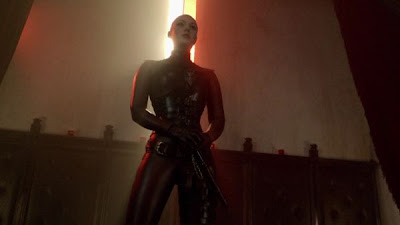 And what a glimpse! I remember thinking what a fabulous outfit, all that skin tight leather and corsetry.


We start to realise what her character is like when she laughingly shrugs off Richard's attempt to fight her with the Sword. Because of course, magic doesn't work on a Mord'Sith. That was a nice twist.. 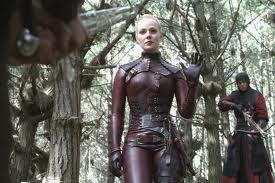 Once Richard is captured we begin to understand exactly what 'training' is. Torture by agiel, a powerful magic that causes immense pain. Mord'Sith take pleaure in causing pain, you can see the satisfied little smile on Denna's face as she takes her agiel to Richard. The sound of the magic and his screams had me grimacing and gritting my teeth for him.. 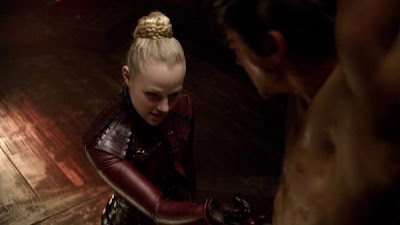 No-one has ever resisted being broken by Mord'Sith. When Kahlan comes in and tries to rescue Richard, Denna brings him out on a chain, cowering and shivering like an abused puppy.
She demonstrates her power over him by making him use the agiel on the woman she knows he loves.. 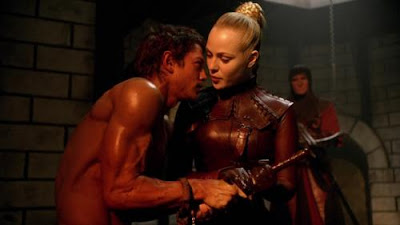 Yet Richard, being the unusual man he is, manages to shake Denna's hold over him at the last minute when she tries to make him stab Kahlan. Instead he stabs Denna instead, leaving her to bleed to death on the floor.

But when she is revived by a fellow Mord'Sith we know that's not the last we'll see of Denna.

And despite her ruthless character and treatment of Richard and of Kahlan, I couldn't help but feel a bit sorry for her when we see her next.. 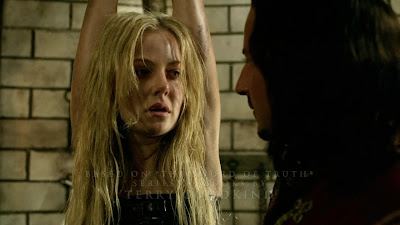 Strung up, bruised and beaten, yet still loyal to the man subjecting her to it.
That compassion soon wore off however when Denna goes after Richard's longlost sister. And we see her true evil side when she kills his mother.

Despite this, when she fails to carry out Darken Rahl's orders again, Richard refuses to kill her, instead telling her to flee. Not sure how many of us would have done the same thing.


But if you thought that was the last you'd see of Denna, you were wrong. In season 2 she crops up again. As a brothel owner. She's abandoned the leathers and the signature long plait.. 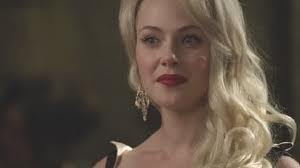 She fits the role well.
Except she's got her eyes on a much bigger prize and this time it involves killing Richard. And bringing a broken puppet soul into his body to rule D'Hara.. 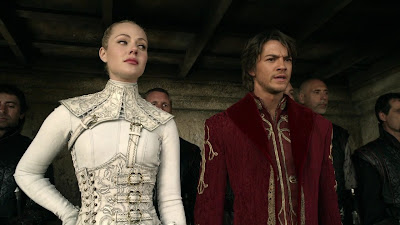 You have to hand it her, the woman's got balls. Her plan is foiled though and so she kidnaps Zedd and forces him to fake their deaths to escape.. 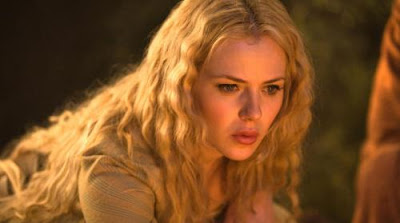 The canny Zedd manages to let Kahlan and Cara know his whereabouts and they rush to rescue him. They arrive and Cara shoots Denna with an arrow, just as she's starting to question her lifestyle. She falls to her death from the clifftop.

So ends the story of Denna. A survivor till the end. I can't help but wonder if she would have changed her life if she hadn't died first.
Posted by Hellsbells at 14:00

Sorry, I've been getting some spam posts that I have to keep deleting so this should help to keep them away.

Thanks for the compliment!